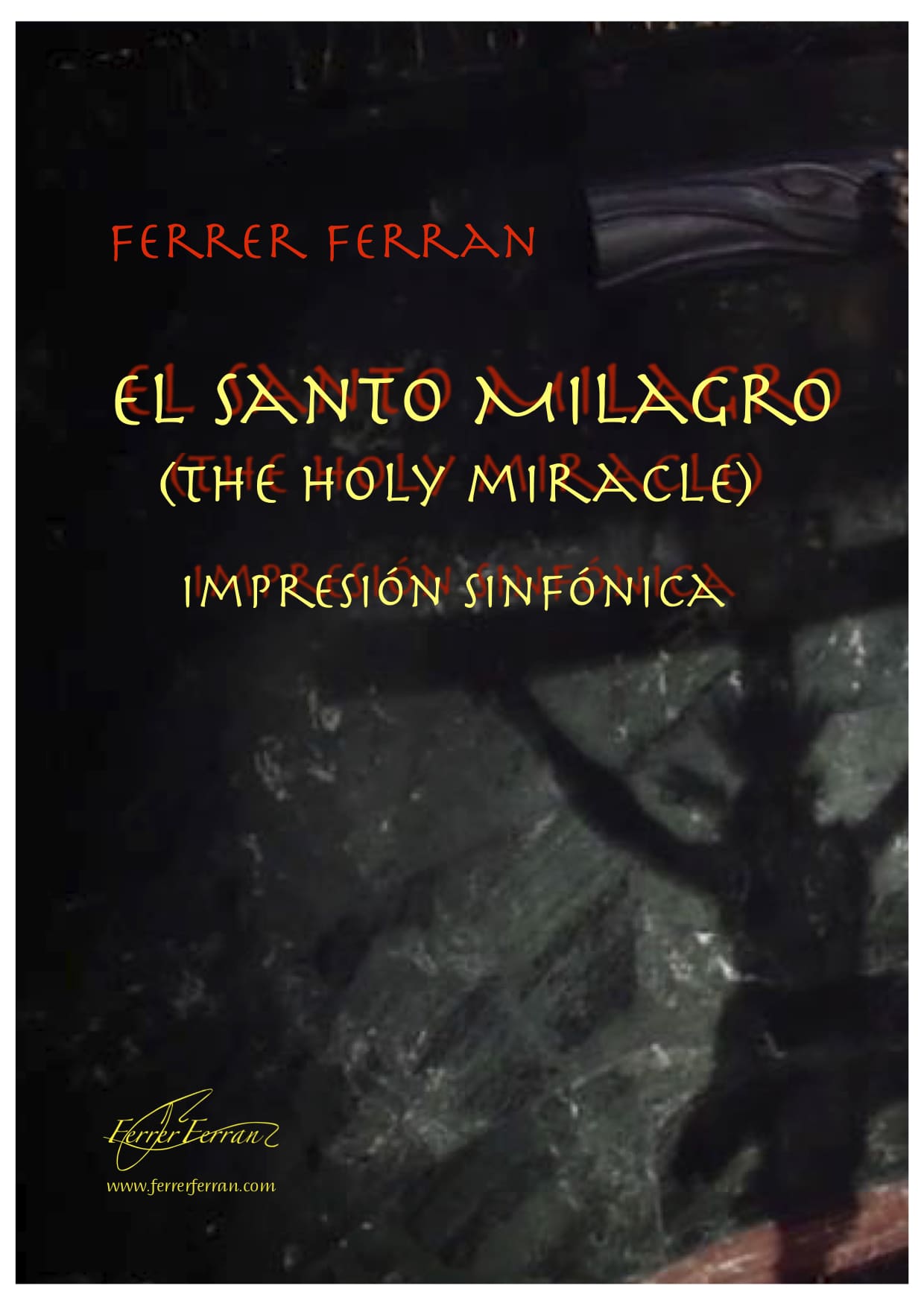 Ferrer Ferran creates a work describing an internationally known event in the city of Seville, the Semana Santa (Holy Week).

Seville is one and is two,

Seville is cry and silence,

Seville, a dream and real,

Seville is song and prayer,

Of Earth and Heaven.

And Seville is ruan.

Seville is a tremendously dual city, from the point it is divided by a great river. This duality becomes much more evident when the Holy Week arrives, as numerous hermandades (brotherhoods) walk through the streets in black dresses, for which the audience shows a reverent and respectful silence, alternating with others, in cloaks and velvet, that always get cheered by that very same people and who, even sometimes, swing their pasos to the sound of joyful marches.

The Holy Week displays a great number of statues on floats (pasos). Among them, six are impressed in this composition:

1.- “Jesús atado en la columna” (Jesus tied in the column): appreciating the pain of Jesus while being scourged.

2.- “La Esperanza Macarena” (Virgin of Hope of Macarena): The Virgin of Seville, the most recognized and visited worldwide, elegant, with the face of the Virgin as a child. And “La Esperanza de Triana” (The Hope of Triana), Virgin of all trianeros, hope of sailors, the brunette, with the face of a Sevillian woman. They march with music by the band “Las Cigarreras” and, when they do, everything turns into joy, cheers, applause and tears. It is the nature of a neighbourhood, old cradle of gypsies and flamencos.

3.- “El Gran Poder” (The Great Power): Jesus of Nazareth with the cross on his shoulders, sculpted by Juan de Mesa, also known as “The Lord of Seville”. It is the most revered paso by all Sevillians. Legends says that its author wept when he presented it to the brotherhood because it was “the very face of God”. Its face manages to reflect the consequences of human suffering in which he appears aged due to the damages suffered.

4.- “El Cachorro de Triana” (The Puppy): named after its author, Ruíz Gijón, based its face on the death of a gypsy man from Triana, the Puppy, stabbed out of jealousy by a payo who believed he was courting his wife. It is told that its author could not sleep, because he was unable to get ideas for the face of a crucified Christ and getting up at dawn saw the face of this gypsy who was dying. When it first came out, all gypsies shouted: “Look, it’s the Puppy.”

5.- “Nuestra Señora de la Victoria” (Our Lady of Victory): beautiful image of a weeping Virgin. This paso is one of the few the history whose headquarters have been on both sides of the river (as it also happens with the Brotherhood of San Benito). The Virgin, although based in Seville, gets also the name of “la palomita de Triana”.